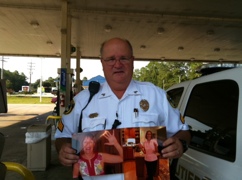 It was a good day, in the way a goal accomplished is a good day. Nine and 1/2 hours, 603 miles and four states: We said we’d make it from Jacksonville to Baton Rouge and by golly, we did! Right now we’re stumbling around our hotel room, muzzy and travel worn, fighting that odd sensation that we can still feel the road rumbling under us.

Sisters Mary and Donna couldn’t take the trip with us, so we brought their pictures. Much of our day’s entertainment was finding places to pose them and then emailing out the resulting pictures with cutlines Carol and I thought were funny. Or, maybe they just seemed funny after an hour or so of humming road noise. My favorite is above. (No, the officer did not stop us. He was just a nice guy who was filling up his cruiser at a gas station where we stopped.)

As evening drew on, and it became clear that Baton Rouge wasn’t appearing over the horizon any time soon, we hopped off the interstate to have a look around rural Louisiana. Men who spoke softly, with liquidy vowels, directed us to the little town of Abita. Carol, who had been there before, remembered a good restaurant there. The town was pretty, and with the sun going down it was nice to walk around, chatting with a few people who were out on the street. But the restaurant was closed on Mondays, so we went on to find a funky bar with great brass rail and a Louisiana-cool mural on the wall.

The shrimp po’ boy was great, and Carol enjoyed her red beans and rice. Our only disappointment was that they ran out of fried green tomatoes before we got there.