We were in New Haven, Connecticut. My husband was working with the editors of the Register and I set up camp in our “studio suite” at an extended stay hotel just down the block. A few weeks earlier a writing coach had agreed to look at some of my fiction and I spent the early part of the week happily deep in the writing cave, updating the work before I sent it off to him.

By Wednesday night I was done, although Steve and I were still in the process of reading it out loud to one another, something I’ve found invaluable when it comes to catching flow and tone and rhythm. At dinner, when Steve asked about my day, I laughed and reminded him I’d spent three solid days at the desk, not even bothering to clear out while the staff came in to empty the trash and bring fresh towels., And I wondered what I’d do with myself now that I’d finished.

Take the car, he suggested, noting he could easily walk to the Register. You could go to one of the beaches, or drive up along the Sound to see the fall colors. Mystic was only about an hour away, he said, and it’s a pretty town. He’d been there before, but I had not. I remembered the movie, “Mystic Pizza” but thought it was a long drive just to pick up a slice for lunch. I wasn’t sure it could be much fun, going alone. But, after a few rainy days, the sun was out the next morning, and the prospect of being out and about after days of solitary work made me glad he’d left the car.

The drive up was just as pretty as you’d expect New England to be in the fall, and I enjoyed it as I sipped my coffee and sang with the music on my iPhone piped through the stereo speakers. I was in a good mood as I followed the well-marked signs, and found easy parking outside Mystic Seaport, a collection of museums meant to give visitors a peek of what life used to be like in the days of tall-masted sailing ships and whaling vessels.

I had a nice chat with the woman at the information desk and two other lady visitors from New York. The discussion wandered from the exhibits in 19th century village ranged along the waterfront to shopping options and the quality of the local pizza. As I stepped away to buy my ticket, one of the New Yorkers told me they were opting for downtown shopping. Did I really think the museum was worth the price of admission? I shrugged. It was a pretty day for walking the grounds and I was intrigued at the idea of exploring a genuine whaling ship and watching the people who are restoring her.

As I walked the decks of the Charles W. Morgan, I immediately began thinking of my father. He was a man with undying curiosity about how things were made and the way they worked. And as helpful docents answered my questions and pointed out interesting things I would have missed, I said to myself again and again, “He would have loved this.” But if Pop’s curiosity was endless he, sadly, was not. He died quite some time ago. Walking along the docks I smiled a little to myself over the fact that I could still so deeply miss a man who’s been in the grave for 18 years.

I almost walked past the little Shipsmith Shop. When I did glance back over my shoulder at the sign I almost didn’t go in. I had seen blacksmiths’ shops before. But then, I recalled, that several people in the little town where I grew up in Iowa, called my father a blacksmith. He was an expert welder and a craftsman when it came to working wrought iron. As long as he was haunting me, I figured I should step inside.The smell of the place alone was like a step back in time. Hot iron, dust and smoke, it’s a unique scent that met us at the door of my father’s shop and clung to his clothes and hands when he came home at night.

A man named Bill Scheer was at the fire, talking to observers as he worked. The really important thing is the temperature, he explained as he pumped the bellows. Too high and the metal burns, too low and you can’t work the iron. And he asked, how do you suppose they judged the heat?
“The color of the fire.” I was surprised when the words came out of my mouth. Bill shot an appreciative grin at me. That’s right, he said. What I’m looking for here is a nice cherry color. 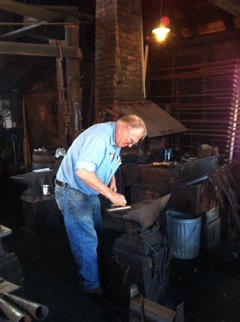 With a pair of iron tongs he pulled a glowing red heart out of the fire. As he worked with it, he went step-by-step through a process he clearly not only understood, but loved, the way only a true craftsman loves his work.

And suddenly I was verbally incontinent. I don’t even remember how I hijacked the demonstration, I just knew I was talking. I told Bill about how, when I was in first grade and my class was studying the wild West and cowboys, my father took me to his shop one night. He explained step-by-step, just as Bill was now, using many of the same words, the process as he heated thick black iron until it glowed red and bent it with a precision I still don’t understand into my initials: MJ. He made me a branding iron that night, to take to school for our history unit. It was just me and him that night. He was still a young man then, and I can see him clearly as he reheated the metal when he was finished, telling me how important it was that thetemperature be just right, so that he didn’t ruin the work he’d done. When the iron was a light, glowing red, he turned and pressed it into a block of wood that sizzled. He smiled as he drew it away, and watched my mouth become a round O to see the initial letters of my first and last name burned there.

I came back to the present with a jolt as I said the words, “I still grieve that I let that branding iron get away from me. I sure wish I had it.” Bill nodded, still working, and I glanced around nervously to see that the others who had been watching him had left. The kind man had listened patiently to the sentimental ravings of nostalgic, middle-aged fool and I began to stammer, trying to form an apology even as I shuffled to the door. But Bill held up a finger and turned to dip something into the water trough. It sizzled.

He came to me then, and held out his hand. His heart was in it.

I’m sure he had no idea that I would burst into tears. I mumbled something like, “Oh, I couldn’t possibly,” but with a wink he pressed his heart into my hand. “You paint this now,” he said, kindly ignoring that I couldn’t speak, “or it will rust.”

Isn’t that what a craftsman always does? Put a bit of his or her heart into what they make, and then offer it up to another? And if the lucky recipient is smart enough, or old enough, they recognize the trueness of the gift.

I painted the heart, Bill. And this time, I’ll hang on to it. 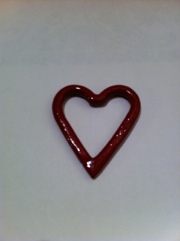 2 thoughts on “The Heart of a Stranger”